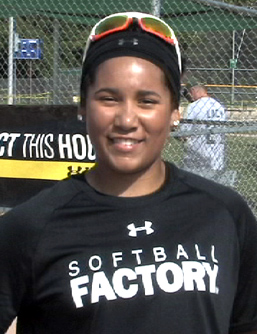 Basketball is in her blood, but softball is in her heart. She had been playing basketball since kindergarten, but when Savanna Rainey was in the fourth grade she bought a bat and a glove and went to Verona Little League tryouts. The rest of her story is still being written, but there’s no doubt that her talent is going to take her places.

Savanna eventually gave up basketball to play on more competitive travel softball teams and so that she could attend camps across the country. The young catcher’s talents were recognized by Softball Factory coaches at her first College PREP event in 2013 and again at the Softball Factory Christmas Camp and Tournament in December of 2014.

Kristina Hilberth-Wyatt was an On Field Director at the 2014 Christmas Camp and Tournament and was able to evaluate Savanna’s performance.

“Savanna understands the game, makes good adjustments, and wants to get better every day,” said Hilberth-Wyatt. “Her hard work and passion for the game will have an immediate impact on a talented team.”

The Softball Factory Christmas Camp and Tournament is a high level invite-only event held every year at Historic Dodgertown in Vero Beach, Florida.

“The Softball Factory Christmas Camp was a great experience for me. I appreciated being coached and taught by the highest level of players like Hannah Rodgers,” says Savanna. “I also met a lot of awesome players from all over the country that I continue to stay in touch with. It is fun to watch who is committing and to where.”

Her parents, Andi & Reggie Rainey, echo Savanna’s thoughts: “The Softball Factory Christmas Camp was a great investment. We appreciated how well the camp was run as well as the tournament portion. We loved the one-on-one interaction our daughter received with Lea Ann. We continue to stay in contact with her and she has been helpful in the recruiting process for Savanna.”

Although she cannot officially be recruited until September 1st of her junior year, Savanna has been invited to camps and on unofficial visits by Division 1 programs including Tennessee, Florida, Florida State, the University of Central Florida, Washington and Syracuse.

Senior Director of Softball Factory Lea Ann Jarvis said that she knows Savanna will be very good anywhere she chooses to go.

“I think Savanna will be a great prospect, a great player, anywhere.” Jarvis said. “She’s very athletic, she’s got a great mindset for the game, extremely coachable, does things the right way…in reference to the game and off the field, and she’s got just a really good head on her shoulders.”