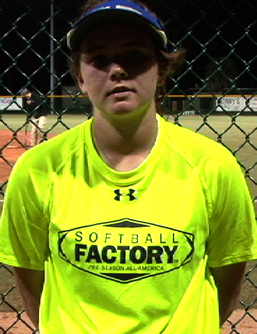 The 2016 grad from College Station High School in College Station, TX has attended numerous Softball Factory events and has been a hard-working and decorated player since we first saw her at a National Tryout event in Georgetown, TX in September of 2014.

“Abby was pushed to work harder,” said Shawn Reynolds, Abby’s father. “She learned what it would take to make it to the next level and beyond and she was able to measure herself against some of the best players in the nation and learn from some the best former players and coaches in the nation.”

“Abby has been a great kid to work with. She has grown so much in the two years I have worked with her,” said Julia Rice, Abby’s Player Development Coordinator.

“Her game has gotten better and better each time we have seen her at our events, and really stuck with the recruiting process. Abby is one of those kids who did all the right things by emailing and calling coaches, and I am so proud of her that she has found a home! I can’t wait to follow her career over the next four years!”

Her senior season at College Station High School has been a successful one, in large part because of Abby’s versatility on the field, playing at multiple positions.

Named a team captain at the start of the season, Abby was the starting catcher for the first half of the season before moving to second base in the middle and then to third at the end due to injuries and the need to have solid defense at the hot corner. Offensively, she’s paced the team with 13 extra base hits, was second in batting average, and second in stolen bases. Overall, Reynolds hit .378, scored 26 runs and drove in 13 in high school play.

The success of the season was based, in part, off of repetition, practice and game play against some of the top players in the country at recent Softball Factory events. Abby was part of successful Softball Factory teams that played in such prestigious events as the Mid-America Championship and Fall Classic Tournaments with highly sought-after talent coming to play from all around the country.

“The events we attended were great for Abigail’s confidence and skills,” said Shawn. “I loved that she was able to learn from such a diverse group of coaches, instead of just the local high school and tournament coaches.”

Beyond just playing games, Shawn mentions how invaluable the experience was for Abby in order to continue gaining confidence and improving her skills.

“The feedback was honest; if there was something that needed improvement, they would give Abby methods for improvement. She learned new drills that she was able to take home and work on. She learned the importance of proper warm-ups, stretches, and nutrition. She participated in college level workouts and was given a glimpse of college level expectations. At the events, Abby was able to sharpen her skills playing with and against top-level players. As the saying goes, iron sharpens iron. She has also learned an increased respect for the game and all who came before her who have grown the game,” said Shawn.

Last November at the Fall Classic, Abby showed that her game was ascending to the next level by her ability to hit to all fields with a good presence in the box and smart pitch recognition. The catching prospect also snapped off a 1.88 pop time to second base, showing off her very strong arm. Scouts noted her tremendous work ethic and leadership skills on the field.

“Abby possesses such a great work ethic and attitude,” said Lea Ann Jarvis, Softball Factory’s Senior Director. “She’s very athletic and plays the game the right way. Extremely coachable and a great team player and will do well at the next level.”

The Reynolds Family placed extreme importance on Abby being able to find the right school that suited her abilities on the field and better positioned herself to be more noticeable to college coaches through connections made at National Tryout events and Softball Factory training and tournament play.

“Softball Factory was very helpful in providing information on how and when to contact coaches,” said Shawn. “The events that we attended were an excellent place to make contacts with former players and coaches who have been through the recruiting process themselves. The coaches at Softball Factory provided honest evaluations that helped us to better target the level of school that was the right fit. The player page that Softball Factory generated was a good resource that Abby could send to coaches. She was provided with feedback on how to improve her game and make herself more marketable. College coaches attended the tournament events and the write-ups done for these events were always positive.”

To borrow a sporting term, “playing from behind”, Shawn and his wife, Megan, realized time was of the essence for Abby to find her dream school and that hard work was the only way to achieve that.

“At our first recruiting seminar with the Factory, we realized that we were already behind in the recruiting process. Softball is growing and so are the opportunities to play at the next level, but that doesn’t mean that there is not a lot of work involved in getting there.”

Beyond playing the game, Abby wants to give back to the sport and the people who helped her gain confidence and the skill set to succeed at the next level. She hopes to some day have the opportunity to help Softball Factory at events in the future. In the present, her dream of playing collegiate ball is now coming true and the future is right around the corner.

“We wish we had started (the recruiting process) earlier,” said Shawn. “We are so happy that Abigail was able to take the first step in her dream to making it to a professional team. Abby will continue to use the tools that she learned at Softball Factory to move from the junior college level to a Division I program. We are very excited for the opportunity that she has earned and we look forward to what her hard work will bring in the future.”