This week, Gatorade announced the winners of the 2017-18 Gatorade State Softball Players of the Year and Softball Factory is proud to announce that six former athletes were recognized for their achievements on and off the field.

We congratulate each state’s winners this year and especially to our Softball Factory family who have received this honor.

The six Softball Factory athletes are:

The junior right-handed pitcher and first baseman helped lead her Cougars squad to a 33-6 record and the regional semifinals this season. On the mound, she went 15-3 with an ERA of 0.50, striking out 133 hitters. She also hit .563 with 13 homers and 41 RBI. Kinney was a First Team All-State selection and helps locally in a soup kitchen and Ronald McDonald House Charities.

Kaylin attended a Softball Factory National Evaluation and Tryout event this past February in Monticello, IA.

Esman, a left-handed pitcher, outfielder and first baseman led the Blue Devils to a 30-5-1 record and she was completely dominant on the mound, going 20-0, 0.45 ERA and an eye-popping 278 strikeouts, entering the district postseason. The senior hit .523 with 11 home runs, 37 RBI and a 1.058 slugging percentage through 36 games. She is ranked as the nation’s No. 66 recruit in the Class of 2019 by Softball America. 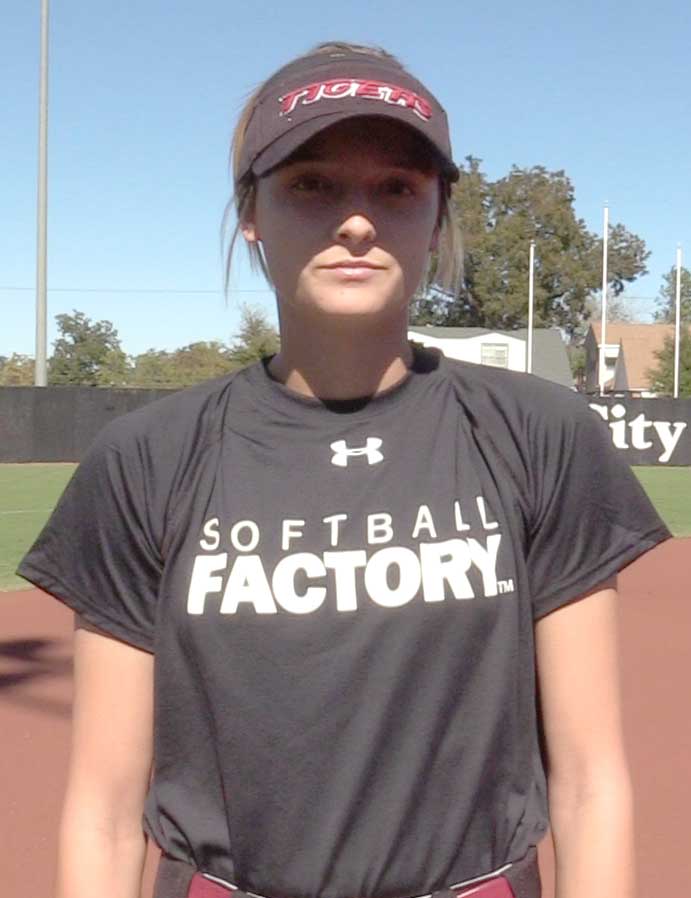 The University of Oklahoma signee performed well at the 2018 Softball Factory All-America Pre-Season Tournament and had previously attended a Softball Factory National Evaluation and Tryout in Oklahoma City, OK back in October of 2017.

Betenbaugh, a senior right-handed pitcher and first baseman led the Yellow Jackets to a 23-5 record and the Class 3A state finals this past season. This is the second Gatorade Softball State Player of the Year award for Bailey, winning it during her sophomore season as well. She went 21-4 in the circle with a 0.64 ERA and struck out 225 batters in 152.1 innings pitched. With the bat, she hit .481 with 12 homers and 38 RBI.

The accolades continue for Betenbaugh, who is a four-time Region Player of the Year and is a devoted member of her youth church group. She is a signee to play softball at the University of South Carolina this Fall.

She attended a Softball Factory National Tryout in Columbia, SC back in April of 2015.

Misken, a senior right-handed pitcher, helped lead the Spartans to a 22-1 record and an appearance in the Class 6, Region C tournament semifinals at the time of her selection.

Her stellar 22-1 record with a 0.35 ERA through 23 games, also included 214 strikeouts and just 12 walks in 139 2/3 innings pitched. She recorded 11 shutouts, including four no-hitters and a perfect game going into their regional final four.

Misken has volunteered locally at an assisted living facility, and worked as a youth baseball coach and youth softball umpire.

Misken participated in the 2016 Under Armour Softball Factory Eastern Classic with her team.

Gatorade has announced the Softball Players of the Year for 2016-17, based on the state each player lives in and this year, eight Softball Factory alums were part of the honor.

Delaware – Avery Wheatley: Avery is a shortstop from Delmar, Delaware and just wrapped up her senior season at Delmar High School. She helped lead the Wildcats to the state championship game at the time she was selected. Wheatley hit .662 with 19 RBI and 40 runs scored and was a First Team All-State selection. Softball Factory first saw Wheatley at a College PREP event in Savannah, GA in November 2014 and a month later, attended Softball Factory’s Christmas Camp & Tournament. In 2015, she participated in the Under Armour Softball Factory Fall Classic. Wheatley has committed to play at the next level with Appalachian State University.

Hawaii – Jocelyn Alo: Alo has now been named Hawaii’s Gatorade State Player of the Year in back-to-back years. She is a senior catcher at Campbell High School in Ewa Beach, HI and helped lead the Lady Sabers to a Division I state title this season, hitting .571 with 12 home runs and 27 RBI. Defensively, she threw out nearly 40% of baserunners attempting to steal. Alo attended an Under Armour Softball Factory National Tryout in Hemet, CA in November, 2016. She has committed to play at the next level with the University of Oklahoma.

Maryland – Kaitlin Beasley-Polko: The Leonardtown, MD native is a senior right-handed pitcher at Leonardtown High School and had an incredible season for the record books. Beasley-Polko dominated in her senior season, going 21-2 with an 0.36 ERA, striking out 331 in 157 innings pitched. Her dominance lasted all season as she threw six no-hitters, including one perfect game, and 15 shutouts. Kaitlin attended the 2016 Under Armour Softball Factory Eastern Classic as an 18U Participant and has committed to Coastal Carolina.

Michigan – Meghan Beaubien: Beaubien wrapped up her senior season at St. Mary Catholic Central High School where she helped the Kestrels to an 18-3 record at the time of her selection. Meghan was 15-1 in the circle with an ERA of 0.43 and 244 strikeouts in 115 innings pitched through 21 games. She attended a November 2016 National Tryout in Waterford Township (Detroit), MI. She will be playing at the next level with the University of Michigan.

Oregon – Lauren Burke: Lauren is a senior shortstop at Marist Catholic High School. Burke is the returning Gatorade State Softball Player of the Year in Oregon and helped the Spartans to a 25-3 record at the time of her selection. Putting together a solid senior season, Burke hit .629 with 14 doubles, 10 home runs, four triples, 62 runs scored and 42 RBI through 28 games. She attended a National Tryout in Hemet, California in 2016 and will play at the next level with the University of Oregon.

South Carolina – Bailey Betenbaugh: Bailey is the only underclass selection of the eight, a huge feat for the sophomore right-handed pitcher and infielder from Union County High School in Union, South Carolina, helping to lead the Yellow Jackets (26-6) to the Class 4A state championship this past season. On the mound, Bailey was 16-4 with a 1.38 ERA and hit .504 with nine homers this season. Softball Factory saw the talented Betenbaugh at an Under Armour Softball Factory National Tryout in Columbia, South Carolina back in 2015.

Texas – Casey Dixon: The senior right-handed pitcher from Willis High School in Willis, TX helped lead the Wildkats to a 39-7 record at the time of her selection with an incredible 34-7 mark in the circle with a 1.07 earned run average and an astounding 415 strikeouts in 236 innings this season. The University of Louisiana-Lafayette commit was even better during their playoff run, tossing two complete games on a single day in each of Willis’ final three rounds of the Class 5A Region 3 Tournament, as her wins were the deciders in each series.

Dixon attended the 2017 Softball Factory All-America Pre-Season Tournament in January and shined, winning an Easton Gloveman Award for her performance.

Virginia – Kathryn Sandercock: Kathryn is a junior right-handed pitcher from Bishop O’Connell High School in Arlington, VA. She helped lead the Knights to a perfect 27-0, winning both the Washington Catholic Athletic Conference and the Virginia Independent Schools Athletic Association Division I state titles this past season. Sandercock was 26-0 with a 0.09 ERA – yes, an 0.09 ERA – and 330 strikeouts in 151 innings pitched, allowing just 35 hits and 19 walks. Softball Factory staff saw the talented Sandercock at the 2016 Under Armour Softball Factory Eastern Classic where soon after, she was selected as a standout to train for the 2017 USA Softball Junior Women’s National Team in Oklahoma City, OK this summer. Sandercock has committed to play at James Madison University.