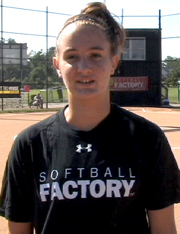 When Kimberly Wert was 10 years old she decided that she wanted to play collegiate softball. Since then she’s worked hard to achieve her dreams. Last year after a summer of travels and college visits she made the decision and verbally committed to play at Hofstra University in New York.

Wert, who primarily plays catcher, had been heavily recruited by colleges and universities for two years prior to making her decision to attend the Colonial Athletic Association Division I school.

“She had a great skill set as a catcher, great pop time,” said Jarvis. “She really understood how to play the position.”

Jarvis went on to say that as strong as she is defensively Kimberly can also produce offensively, noting that Wert is a solid gap-to-gap hitter.

Kimberly joined the Factory family in 2013 and since then has been invited to compete in Under Armour Softball Factory National Team events around the country.

“She [Kimberly] has a great attitude about the game and a great work ethic to go along with it.” Jarvis said, “I felt like she gave back to the game what she was getting out of it and to me that’s one of the most important qualities in a player. I look forward to seeing her success at the next level.”

The Dukes full 2016 schedule can be found here.